I have needed a site to help with word choice in poetry. I found  https://www.rhymezone.com and use it frequently.

When you need them, it will find homophones and similar sounding words. The similar sounding word lists include a rating of the closeness of the similarity and the options’ popularity. It will also search for a word in the titles of Wikipedia articles. It has examples of words in the context of lyrics and poems. It also provides several definitions for a word.

One query I made showed that “harsh” has the same consonants as the surnames “Harsch,” “Hirsche” and “Horsch”. This is one example of how it is integrated with a table of surnames. For “book,” there are 46 different words with the same consonants including dictionary words, surnames and rare words.

There are many uses for the web site. It’s presented in a well made design that integrates its features conveniently. Their article RhymeZone Turns 20 (with updates aplenty) describes features of the site.

If you’re a writer, it definitely is worthwhile to add this site to your favorite bookmark list.

In Blinded by the Light, the first advice of dad for his son’s entry to a new school is “Stay away from the girls.” Javed, played by Viveik Karla, is a teenager in Luton, Great Britain whose parents emigrated from Pakistan. He longs to escape the nowhere town and hopes college will lead to a career as a writer. He has been an avid writer with years of journals lined up in his room. School can become his road to escape.

Javed’s longtime friend, Matt, played by Dean-Charles Chapman, is a musician whom Javed helps by writing lyrics. Matt’s frustrated with the political stock of Javed’s songs: they’re not performable. He still holds out hope for Javed’s lyrics getting better.

Javed’s father, played by Kulvinder Ghir, is an immigrant from Pakistan. He is the center of the household and manages the household’s money. The traditional role of the father is a struggle for Javed’s father when circumstances change. Unlike in Fiddler on the Roof, the family is not torn apart by events beyond their control. However, events beyond their control such as the recession under Margaret Thatcher still make them stretch and evolve.

Javed meets Roops at school. Roops, played by Aaron Phagura, gives Javed some Bruce Springsteen cassettes. The songs revolutionize Javed’s attitude and fill him with power. He feels that the music speaks directly to him. Springsteen puts words to his feelings and cinematically, the words are visually swirling around Javed as he listens.

Central to the progression of Javed as a writer is his teacher Ms. Clay, played by Hayley Atwell. She scolds him for not sharing with the world the raw emotion in his writing when he discards his poems. He follows her inspiration and writes in the school paper and then a local newspaper. Javed’s cultural background and knowledge of Urdu allow him to write a powerful story about the community’s mosque.

While the movie isn’t exactly a musical, music has a central place to the story. The movie is full of the angst and joy of youth. Javed and Roops go to New Jersey after he wins a writing contest. During the trip, the friends make a pilgrimage to visit Bruce Springsteen’s hometown sites.

Blinded by the Light is an melange of conflicting cultures. The Pakistani community, the people hostile to them, students at the high school, and Javed’s friends all mix together into a scene of hope that is inspired by Bruce.

With all of the heavy awful news, I thought I’d give you something light and funny. I got a lot of jokes in this past day.

It had a really pretty snow this morning. I was talking to my roommate and remarked that I was definitely not going out to make a snow angel. I was thinking of the song “Alienation” by Morning Parade.

The song alienation was it’s own paradox. Is is one of my favorite songs. It’s title “Alienation” reflected my feeling at the time of being alienated. I promised something lite thought so enough of that.

What do you call two twins who live together. 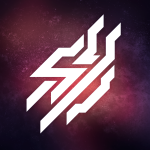 A logo I commissioned for Smiling Y

BWS/WBS – artist (They have two different themes; can’t remember what)
sesquized – email
emu-bark.com – a domain that is supposed to be private… I give it to all of the potentially annoying business, charities and politicians.
Bill W. – anonymous. don’t tell any one. hear hear
I’ve got a Korg Poly 800 ii keyboard. Haven’t got a name for him
… I’ve run out of ideas (a couple times over)

Lite only can go so long. Have a great St. Patrick’s Day. I’m speaking at Anthony Wayne Toastmasters at Ivy Tech on Coliseum in Fort Wayne. We start at 6:30. Another stage name that week too: ‘Bill O’Smith’ (I didn’t make that one up, blame Berniece and Dave Wilkins.)

My home is a mess. a big mess. Not that I’m complaining. It proves I don’t have OCD. Hopefully it doesn’t look like I’m a hoarder… no shame in that.

The Firehose feature of genius.com is cool. It is a (figurative) firehose spewing out all of the activity on the site. It reminds me of Tweetdeck. To sample the firehose, you need to be logged in.

I see that some of the user names are (more than a little) sketchy. (Other sites I visit would ban them day zero.) I find the site pretty light-hearted—‘bad’ people get put in a penalty box (à la hockey) and people who are banned often get a chance to leave a parting message (which is just goofy).

Commenting in the forums requires more IQ than I have right now. Right now my project (quest) is to get all of the metadata for the group Saga corrected. Right now everything Saga is listed under the rapper Saïga. The real Saga from Canada is nowhere to be found. I guess I’m passionate about Saga…. having over 30 discs on my shelf.

There are plenty of lyrics websites. The closest one to Genius that I’ve found is Song Meanings. Both Genius and Song Meanings are crowd-sourced. But, Genius is hands down the winner.

The artists are part of the Genius community and often contribute textually or with song breakdown videos. Linkin Park Breaks Down “Good Goodbye” On Genius’ Video Series ‘Verified’ was one of the first I saw, before Chester Bennington’s suicide.

My vote of confidence for Genius is that I prefer to add site:genius.com when I’m using a search engine.