I went to the local antique shop and found this beautiful Bible. It has an engraved wooden cover. I also appreciate it’s using photographs for some of the illustrations inside the book. 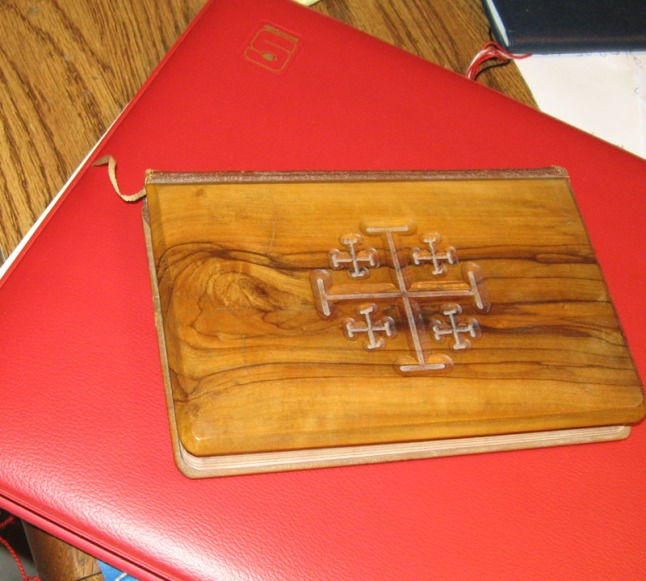 The title page says that is the Authorised Version from 1913.

The inscription in the back of the title page reads:

“In terms of the Letters Patent granted by Her late Majesty Queen Victoria to Her Printers for Scotland, and of the instructions issued by Her Majesty in Council, dated Eleventh July, Eighteen Hundred and Thirty-nine, I hereby License and Authorise William Collins, Sons and Company, Limited to Print and Publish, as by the Authority of His Majesty King George the Fifth, an Edition of the New Testament, in Brevier Antique Type, decimo-sexto size, to consist of Six Thousand Copies, as proposed in their Declaration, dated the Twentieth day of February, Nineteen Hundred and Thirteen, the terms and conditions of the said Instructions being always and to all points fully complied with and observed by the said William Collins, Sons and Company, Limited. Dated at London, the Eighth day of March, Nineteen Hundred and Thirteen. Alex. Ure.

A couple of the plates include:

“The supposed tomb of Lazarus (near Bethany), whom Jesus raised from the dead (John 11.3) The picture shows the opening from which the stone was removed.”

Usually in my Bible collection, I collect different translations, but this is a beautiful enough volume, that I intend to keep it as a duplicate.

The universal model for depression is that it a chemical imbalance in the brain. I have serious reservations about the value of that model.

The core problem with the idea is that it is disempowering. The message is “you can’t help yourself get better.”

What thoughts that follow once a person believes that their depression is due to a chemical imbalance?

When you cut your hand, you know what is hygienic. Rinse it in water. Keep it clean and cover it with a bandage. Watch for signs of infection or use an antibiotic ointment.

A person can be suffering and depressed. Today, the person learns very few tools for recovery. There isn’t any hygiene to practice; no prevention strategies.

A treatment plan might be little more than not to get worse. The tacit meaning of “chemical imbalance” is that a depressed person needs to look to doctors. Then, people with letters after their name can help make the best of it.

Although this can be an appropriate treatment, the model for a disease needs to be useful.

“Chemical imbalance in the brain” is glib. It rolls of the tongue so easily that it doesn’t get inspection. However, it doesn’t help anyone understand depression nor take action.

A well-known cliche is “Don’t shoot the messenger.” When someone brings bad news, don’t blame the messengers who brought it.

A related principle is “Don’t shoot the message.” This principle notes that a good idea that comes from an bad source is still a good idea.

Some physicians and medical scientists defect to ISIS. They discover a cure for cancer that is extremely inexpensive. In addition, this cure has a 95% 10 year survival rate. The cure is simple to use and very safe. What would you, as a patient, do with a cure that was created by terrorists?

One situation to apply the principle is in religious spheres. The spiritual principles from an incompatible faith community can still deserve a fair hearing.

Perhaps the most obvious way this principle is violated today is in the political arena. If the minority party in the Senate has a good idea, the majority opponents won’t consider it for more than a minute.

If you’re making a decision, don’t shoot the message.

The coming of Passover commemorates God’s deliverance of the Israelites from Egypt.

Easter is intimately tied to Passover. Easter is a celebration of deliverance for Christians.

Exodus 22:21 admonishes “Do not wrong or oppress any outsiders living among you, for there was a time when you lived as outsiders in the land of Egypt.” (The Voice)

America can wrong and oppress them if it chooses. Our elected leaders appear to be at the front of the line….