On my way home from Fort Wayne tonight I ran into an awkward driving situation. 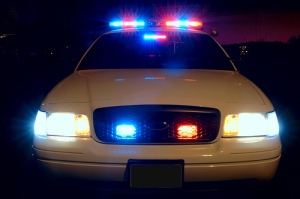 I was on I-69 and near my exit, a police car had pulled someone over. Just as I was passing them, they took off. I ended up being in the left lane with the pullee ahead of me on the right and the puller right behind me in my blind spot. I was exiting the interstate in about a mile, so I needed to switch lanes.

It was very uncomfortable because I didn’t know how trigger-happy the police officer was. So, gulp, I turned on my right turn signal and accelerated above the speed limit so that I wouldn’t cut off the police car while I was changing lanes. Of course, the pullee was accelerating conservatively, making the merge even more awkward. Anyway, nothing bad happened.

So, this is where Indiana driving gets a ‘plus’. About a dozen years ago on the toll road I-80/90 across the north edge of the state, there was an accident where someone got killed by a truck passing too close to a stopped vehicle. (I remember that it was the man who had been principal of my high school.) The legislature passed a law that says that if an emergency vehicle is on the side of the road, you need to either pull over to the other lane or slow down.

In practice, 95% of the time that means that drivers pull into the next lane. The behavior has generalized to other situations where someone is on the side of the road. I think this improves safety by reducing the situations that traffic passes too close to a stopped vehicle.

Indiana gets a ‘minus’ for a law that just started in 2015: If you are in the passing lane and someone comes up behind you, you have to get into the right lane. That sounded good (to someone), but it comes with a $500 fine and just to be perverse, the fact that the person coming behind you was speeding is not a defense.

The effect of this is to create a lot more tailgating on the highway. People get rude when they think the car in front of them isn’t getting out of the way fast enough. Lately, I’ve seen plenty of examples of 7 or 8 cars scrunched together in a space that probably should only have two. In addition, some people take the get out of the way edict too seriously and pull back out of the passing lane less than a car length ahead of the slower car. All in all, lots more tailgating to prevent a situation that is not very common.

I think this law is making things less safe, not more safe because of the increased possibility of chain-reaction accidents.

I went to the Fort Wayne Toastmasters International Speech contest today. It was nice. I met a bunch of new people and also saw a bunch of people from my home club.

There weren’t a lot of contestants, but they were all really interesting.

A friend came with me. Maybe he’ll join soon? He had to leave early.

I was a little off-put at the beginning because it seemed like everyone else was wearing a suit and I just had dark pants and a tan shirt. Next time I’ll dress up more. After I was there for a little while I saw that not all of the men were in suits so I felt a little better after that.

April 16 is the next level of the contest. I hope to be there as well. I might even be able to be a judge….

My next speech is the 24th. I’m probably going to share something about Tao Te Ching, the Quran or other sacred writings. My club tends to be pretty Christian-oriented, so it’ll be nice to give a different perspective. The club is Anthony Wayne Toastmasters #521 if you want to come visit.

I lose an hour tonight, so I’m going to bed early. I’ve got all of my clocks adjusted. (The phone and computers will take care of themselves.)

One of the things slowing me down on posting on this blog is that I think I have to say something original. I get a lot of ideas, but if their negative and critical, I’m likely to delete them before they’re done.

The title is a pun… I’m taking a Library Science class at IUPUI “Metadata” and since this is a post talking about the post, it’s also meta.

If I don’t have to be original, I probably have more to say, but I don’t like saying things that are imaginary so I’m careful.

Sometimes my friends and I have an animated conversation. We’re on the same wavelength a lot of the time so gear shifts just flow. It can lead to some humor when there’s a pun in the transition.

In addition to the standard STDIN, STDOUT and STDERR I/O streams available to processes, the concept of XMLIN and XMLOUT streams could be very useful. I’m not talking about XML pipelines such as described in https://www.w3.org/TR/xml-pipeline/ I don’t want to make tools that are programmed to manipulate all XML but rather use XML as an encoding of the data that is more flexible than flat files.

In a pipeline of processes, passing the information as structured data would allow the pipes to analyze information in a more intelligent manner. I would treat the XMLIN/OUT streams as a sequence of XML documents. The goal would be to help in processing complex data.

I have growing tables of user properties from deviantart. I could create filters to extract fields of the data and format them as XML. This formatted data could feed more specialized tools later in the pipeline.

For example, I could extract the number of works that each user has over time. The first filter would extract all of the records for each user. The next level in the pipeline would perform a regression analysis and the final tool would encode the information graphically.

Information formatted as XML allows more generic tools. They will be able to ignore information that the an earlier tool produced more easily. Tags that are unexpected will be invisible. When formatting the information as flat text through STDIN and STDOUT, the tool has to know to ignore column 3 and 5 more specifically. XML can make the data more robust.

One reason for logically separating STDIN/OUT from XMLIN/OUT is that filters may work in either mode. If an standard tool is useful, it will use the data from STDIN. It won’t negate the more general purpose formatting from XMLIN. Alternatively, STDIN could pass configuration information while XMLIN is data based.

Implementing two input streams and two output streams in a way that is cooperative is a technical challenge. Opening the extra pipes is easy, but the tools could easily deadlock if it was done incorrectly.

Embedding the XML and free format output as an escaped sections of the normal STDIN/OUT pipe is another possibility.

In a less ambitious project, XMLIN/OUT would just be conceptual and the filter apps would have flags indicating which mode to use.