My main computer locked up while making a crash log last week. The blue screen error said “page fault in non-paged area.” When I tried to reboot it, it wouldn’t even POST. The disk would appear active for a second and then the computer would stop making any progress. The splash screen never came up.

I took it into a local computer shop so that they could fix it. Because of the holiday, they didn’t get to it promptly. While I was waiting through Christmas, I decided that if it was broken, it’s old enough that it wasn’t worth fixing.

I started looking for a replacement computer to buy. I had an selection of parts on Newegg and called the computer shop to pick up the old machine. Much to my surprise, when I got it home, it booted up fine.

I thought that that was quite fortuitous that it worked. I saved about $900 + lots of work in buying a new computer or $125+ if they repaired it.

It isn’t “fixed”, but I’m hopeful that it won’t crash that way again for a while. I need to use a memory testing tool since failing memory is a likely cause of the problem.

It is a massive tangle of cables in the back of the computer. I think I’m better at putting it together again if/when I need to open it up again.

When I go over to Mom and Dad’s, sometimes we play dominoes. Our go-to game is Mexican Train.

Dad was at choir practice last night so it was just mom and I. We decided to alter the rules and play with a double 10 set of dominoes and start with 12 each instead of 15.

It was very pleasant. Not too much thinking and the rounds didn’t last too long.

Mom started building a tower, so I thought I’d build one too. I had an idea to make it triangular instead of square. That turned out to be pretty stable.

I got it pretty high

A tower of dominoes only lasts so long

This is after the inevitable. 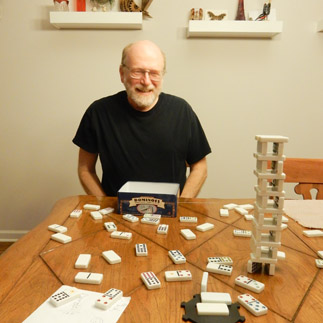 Mom had the camera pointing at me just as it fell, but she jumped out of surprise so there aren’t any pictures of the demolition.