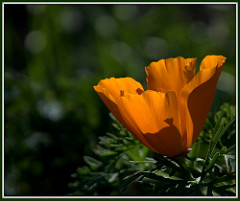 Once he started doing things that he was ashamed of, he didn’t want the people around him to find out. He tried to separate the people on one side from the other. If they met, the information could make things awkward.

He decided to pull away from the former group of people because they were the ones that would disapprove of the others. The secrets were growing and the far side became more important and the closer ones were bewildered by his behavior.

As the circle shifted, problems started to pile up. Issues that could be easily solved with an honest discussion, couldn’t get fixed because of the risk of exposure.

Until the secrets were taken out of the darkness, they festered and led to more and more bad times.

He decided to make a change and gradually, the secrets became less threatening. Trust was slowly coming back. The circles realigned and it became possible to move forward again.