In addition to the standard STDIN, STDOUT and STDERR I/O streams available to processes, the concept of XMLIN and XMLOUT streams could be very useful. I’m not talking about XML pipelines such as described in https://www.w3.org/TR/xml-pipeline/ I don’t want to make tools that are programmed to manipulate all XML but rather use XML as an encoding of the data that is more flexible than flat files.

In a pipeline of processes, passing the information as structured data would allow the pipes to analyze information in a more intelligent manner. I would treat the XMLIN/OUT streams as a sequence of XML documents. The goal would be to help in processing complex data.

I have growing tables of user properties from deviantart. I could create filters to extract fields of the data and format them as XML. This formatted data could feed more specialized tools later in the pipeline.

For example, I could extract the number of works that each user has over time. The first filter would extract all of the records for each user. The next level in the pipeline would perform a regression analysis and the final tool would encode the information graphically.

Information formatted as XML allows more generic tools. They will be able to ignore information that the an earlier tool produced more easily. Tags that are unexpected will be invisible. When formatting the information as flat text through STDIN and STDOUT, the tool has to know to ignore column 3 and 5 more specifically. XML can make the data more robust. 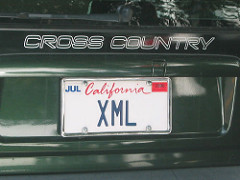 One reason for logically separating STDIN/OUT from XMLIN/OUT is that filters may work in either mode. If an standard tool is useful, it will use the data from STDIN. It won’t negate the more general purpose formatting from XMLIN. Alternatively, STDIN could pass configuration information while XMLIN is data based.

Implementing two input streams and two output streams in a way that is cooperative is a technical challenge. Opening the extra pipes is easy, but the tools could easily deadlock if it was done incorrectly.

Embedding the XML and free format output as an escaped sections of the normal STDIN/OUT pipe is another possibility.

In a less ambitious project, XMLIN/OUT would just be conceptual and the filter apps would have flags indicating which mode to use.